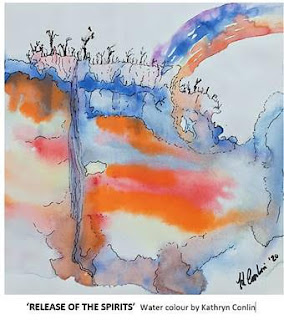 I Don’t Want To Go First

I don’t want to be the first to go
Why me?
Well, who was here first?
We meet at the same time, I think,
That’s right, I pushed past you.
No, you went right through me,
Split me in two, go break the waters
Let mother know you are on the way
It’s too much for me
Give her love
From the twin who stayed.

Alone in the dark was a deep place to be
Full of nightmares, evil and then there was me
Someone I didn’t even really know
How does that happen, where do we go?
I thought I could see it all in front of me
A path that was laid out so clearly
But I looked down one day onto shoes of ruby red
And started listening to the voices in my head
It was time to click my heels
and start the path home
Even if it meant leaving all that I had known
This journey is not for the faint of heart
Ascension will build you and then tear you apart
All to allow you to rise higher still
For how else would you see beyond the next hill?
It is a yellow brick road littered with things
Don’t get stuck running around in rings
The brainless, the heartless and those
filled with fear
Take care with those you choose to let near
You’ll need to clear out the junk in your mind
Illusion, delusion amongst the things you may find
A lifetime of secrets you have held in place
Each one of them you will most certainly face
Learn how to face the witch that lives within
Balance those demons beneath your skin
Each new step brings a lesson or three
Search within so that you can see
No Wizard of Oz is higher than you
The truth is you already know what to do
It is all inside and love is the key
That is something I hope you will see.

Don’t put that weight on ourselves of your passing in that hell hole. Please know, we all now hold you so close to our heavy hearts. And whilst your final moments were severely unkind, the wings of your spirit guides have now set you free.

You have our utmost respect,
Our love,
And most of all desire,
That with new wisdom,
You will re-incarnate,
Yet again,
In some way,
To continue your lives till their true end,
This time,
With peaceful and pleasant purpose.
...it is all in our hands.

One day when I am in the mood,
I would like to buy a cat.
I’d take care of him and give him food
And exercise so he doesn’t get fat.

I’ll give him a cool name
Like Rock Star, Foxy or Moo.
I’d pat him, sit with him and play a game.
Maybe I’d buy not one but two.

In 1965 Tasmania was in drought.
Hard to believe no doubt.
Twice a week we could have a shower
Due to restrictions on water and power.
No watering of gardens or washing the car.
Concerns about stretching the water so far.
Joe White’s wife was being defiant.
She said her plants were reliant
On a good soaking.
Little did she know the trouble she was provoking!
Her neighbour was most annoyed.
And so rang the Burnie Water Board.
She was watering her garden

When the warden came.
What happened next brought her
Notoriety and shame.
She turned the hose on the water warden.

How Lucky Am I  - To Live in Penguin

How lucky am I - to live in Penguin!
Today, my home has not been caught up
in the bushfires.
I live by the sea - hear the sound of the waves
Yet have not been flooded.
I live in peace - do not have to go and fight wars in               lands for causes that I do not understand.
Nobody objects to my religion or what
I believe or do not believe in.
Fifty-seven years ago today, I started my career and I find that I still have some work to occupy and exercise my mind.
Although I live far away from my lifelong
contemporaries and my relatives,
I am surrounded by newly-made friends.
I know how lucky am I - to live in Penguin!

Little Ms Tinny has no need for temporary
Short-lived, fleeting toys
For she can rummage through the garbage
And find things so that she can utilise her creative mind.
Judy Brumby-Lake

Small: Yes, hello. My name’s Small.
Large: This is Officer Large. How can I help?
Small: Well, I’ve got a small problem. Actually it could be quite large, or er…not quite so large.
Large: You mean medium.
Small: Medium to largish.
Large: Somewhere in between.
Small: Yes, but not so small as to be insignificant. Miniscule. Not so large as to be huge.
Large: Larger than life.
Small: More like life and death - for some anyway.
Large: Give me the details and I’ll pass it on.
Small: Well I live in this not so small house, well, largish you might say. Three bedrooms, none of which will be of any interest to you. I can see over my neighbour’s roof - Mrs Lendanear‘s place. Thing is two men are - were - up there replacing tiles. One of them slipped - the man and the tile - and the tile hit Mrs Lendanear on the head. She was looking out of her window. Well, you wouldn’t believe it, she was wearing a wig! The tile knocked it clean off. Bald as a coot she is.  One shiny cone!
Large: And what is Mrs Lendanear doing now?
Small: Well, not much. Just hanging out the window, arms dangling. Kind of unconscious. But that’s not the worst part. One of the men on the roof was eating a sandwich when the other slipped. He hung on to his mate’s sandwich but the crust wasn’t strong enough to hold his weight. And he fell.
Large: What’s the other man doing?
Small: The one on the roof? He’s finishing his lunch. Just swallowed the last piece of  sandwich. Salad sandwich, I think. Maybe some ham as well. Hard to tell from here.
Large: And what about the one who fell? What’s he doing?
Small: Well, not much either. Sort of sprawled on top of a car in the street.
Large: Is he moving?
Small: Not really. Just there, like he’s having a rest. Thing is, when he hit the car’s roof, the driver must have got such a shock, he hit his accelerator, not his brakes. The car jumped forward and hit some garbage bins outside the jeweller’s shop, pinning a young boy against the glass door, which shattered.
Large: How’s the lad?
Small: He’s lying on a bed of broken glass and diamonds.
Large: The jewel in someone’s life, I’m sure.
Small: Broke the window, too. And there’s jewellery everywhere. People are running around going crazy. So’s the owner of the shop.
Large: Are they stealing the jewellery?
Small: They could be. It’s a mad house down there.
Large: Sounds like a job for the robbery squad then.
Small: So you see my problem’s not so small. In fact, quite large.
Large: Indeed yes, for those who’re hurt.
Small: I think some might be more than hurt.
Large: Departed you mean.
Small: Yes, deceased. Expired. No longer breathing, or breathing with difficulty.
Large: What about the other man on the roof?
Small: He’s just leaning over the guttering looking down at Mrs Lendanear’s bald head. And his mate, of course.
Large: And the driver of the car?
Small: Well, three people are trying to get him out. I think it’s a man. Could be a woman. You can’t tell these days. Anyway, it’s sort of a not so large car now. Not factory design anymore, that’s for sure. The driver could be oh-so-squeezy inside.
Large: They don’t make them like they used to, cars that is.
Small: Should we ring the ambulance and fire brigade? And you might need the Jaws of Life.
Large: Jaws of Death more like. From what you tell me. I remember something like the Jaws of Death at the fair ground, when I was young, of course. Everyone would scream and carry on.
Small: There’s some screaming going on now. Can you hurry?
Large: All in good time. We’ve got a truck roll-over on the main arterial road out of town. All available officers are out there trying to keep traffic moving. We’ll get there as soon as we can.
Small: Well, you wouldn’t read about it!
Large: Another accident?
Small: How did you guess! The other man - the one on the roof looking down - well, the guttering he was leaning on has given way. And he’s knocked Mrs Lendanear out of her window. Down she goes, down he goes! Crash, bang, wallop! And they’ve both landed on top of the squashed car! And the guttering has hit the three people trying to help the flattened driver.
Large: And Mrs Lendanear?
Small: She’s sandwiched between the two men.
Large: Lucky Mrs Lendanear!
Small: Well, she won’t be getting her roof re-tiled today. Or getting a new wig! Or lending an ear!
Large: Day’s been a bit out of the ordinary then.
Small: You can say that again!
Large: Day’s been…
Small: Yes, yes.
Large: Before you go, can you give me the details again so I can be sure I’ve got it right?
Small: Well, I was looking out of my window, as neighbours often do, when this man slipped on a loose tile…

This watered ball of fire, our star,
Rolls slowly around the globe that gave it life
It is heating ever slowly and on par
With all the other objects’ spiralled dive.

As God, He sees the maggots build their hives,
Destroying others without much concern
To force and give themselves to selfish drives
When futures seem to be a hellish burn.

But now that I am old, I cannot grow.
The future is not mine, you told me so.

Sit and ponder on past years.
Town of historic charm so famous.
Glorious, beautiful Portland - so very true,
On the ocean, the waves roll to the milky shore,
Weathered fishermen feel the sea spray on their
loved faces.
Let us walk the tranquil, bleached beaches.
The local band’s music echoed for miles.
Mechanics’ Hall, many smiles,
Men standing near the inside doors,
Shy young maidens sitting on-site.
Loudspeaker: “Ladies’ choice!”
Neverending memories.
The last waltz and anthem.
Again let us walk the shores.
Crashing waves stampede against the rocks.
Salty breath everywhere.
Breeze kisses the faces of many.
Let us walk the tranquil beaches.
Thinking of past years.