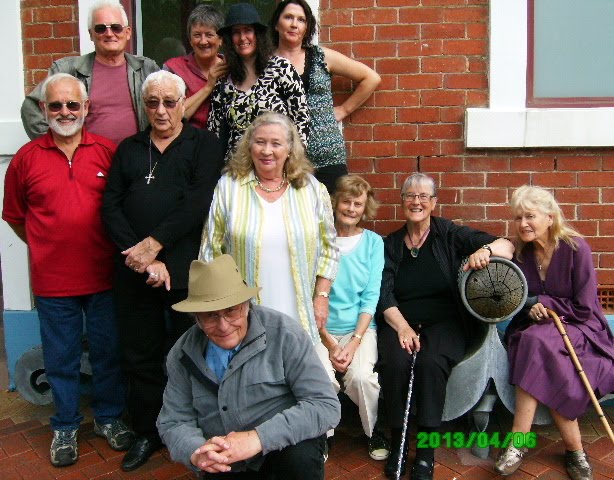 Some of the Europa poets

In the shadow of the end,
I am,
The truth of me,
Shed of camouflage,
Divest of superficial words,
The who, unburdened,
It is time,
Shadow stirs, stretches,
Rush from cover, this identity,
The one, as born,
The being, hidden, revealed,
Joy of the seed that is me,
Shadow falls, overwhelms,
I am.
Michael Garrad May 2020

Night Must Fall
And night must fall,
The puzzle pieces,
components of life,
implode, explode
in glorious, gruesome
sequence of
uncontrolled symmetry,
fired by rage of imagination
and futile hope,
the remains of an existence,
once orderly,
without future’s glance,
only now to cascade,
downward, in spiral of regret.
Jigsaw pieces in confusion,
tumbling in the dark
of a chaotic mind,
heard and seen,
touched in endless room
that never stills.
At pale dawn,
nothing is substantive,
puzzle pieces in pattern,
precise in still-life portrait,
where they were arranged
at memory’s beginning.
Michael Garrad May 2020

Ilford in Essex
Lidcombe and Auburn in Western Sydney.
Long Pond in Jamaica.
Umina-Central Coast, New South Wales.
Penguin-Central Coast, Tasmania.
In my life, I have been privileged
To have called many places home.
In each one, something different, something special.
Certainly some problems but far more pleasures and treasures.
Home is where your heart is.
You and your family make your own home.
Phil Harper

Wanna Bet?
He was sitting on his chair outside,
Listening to the races.
We were on the ramp
With smiles on our faces,
For we had a magnifying glass
Shining on his bald head.
He only got a few wins
But he got a sunburnt spot instead.
He was sitting on the roof
Listening to the races
We were down below
With smiles on our faces.
‘Ha! You kids can’t get me from down there!’
he said smugly, as he relaxed in his chair.
We removed the ladder
So he couldn’t get down.
I reckon you could hear him swearing
All over town!
Now mum would often say,
‘Robbie loads the gun and Alan pulls the trigger’.
I wasn’t always guilty, mum.
Well, that’s what I figure.
Robbie Taylor

Cracker night was on May 24
Until the Government had its way.
A neighbour would build a bonfire
And we would bring our crackers along.
There were fireworks, marshmallows
And a singalong.
One year went to Foster’s farm
Up Ridgley way.
I was disappointed
Seeing as we’d come a fair way.
There was no bonfire,
Or a singalong
But we brought some food
And our crackers along.
I sneaked up to the dairy
And pinched a clean cream can.
But the dog chased me
And I bloody ran!
Once the cream can was in place
We put six bangers within.
After the mighty boom
The cream can began to spin.
The lid hurtled into the air
And came down with a clang.
Our ears were buzzing
From the loud bang.
The farmer’s wife came running down the hill.
Ranting in dismay.
“You could have been killed,” was all that mum could say.
When I look back on cracker nights
I particularly remember this one.
Despite there being no bonfire
It was the one where we had the most fun.

Ronnie-bell
We’re on the sniff trail
At the edge of the bitumen
With all the sights, sounds and smells
Of the forest to pique us
You lead a wandering path
My patience is to follow
You discover all sorts to eat
Most of them yucky
A burr gets caught in your coat
I remove it gently
You press your nose against my leg
And we continue on our wandering way
Catherine Burton 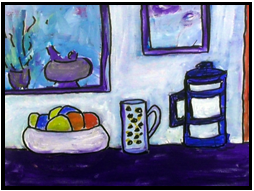 The List In That Damned Bucket
I’ve had a bucket list for a while,
I think, since I was about ten.
I’ve thrown some wishes in at times
But pulled them out again.
The bucket changes over time,
Sometimes it’s a coloured bowl
But importantly I’d grab new dreams
And place them in that hole.
The biggest dream I wished to tick
Was to climb Mt Everest,
To be first woman to that peak…
But didn’t…as you’ve guessed!
So then I thought, Antarctica
Would be the place to see.
So I set sail in ‘92
And got there in ’93.
And then I went to Canada,
And skied in minus 20.
I ‘tried’ the Olympic downhill run…
I figured that was plenty!
My final bucket wish would be
To see the great aurora,
The dazzling colours, pink and green
…that amazing curtained aura.
I haven’t seen it yet but know
That magic will transpire.
And whilst I’m nowhere near those poles
That dream will never tire… 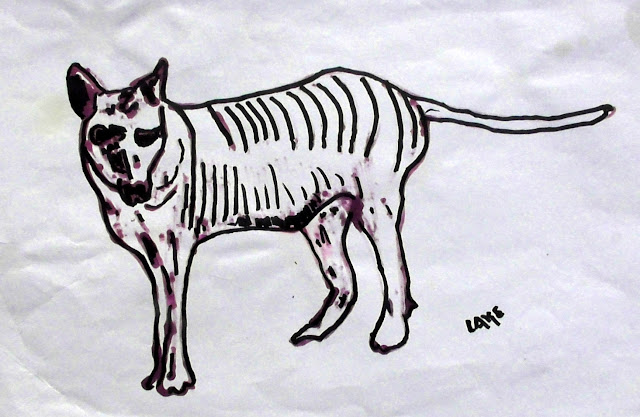 Ode To The Tasmanian Tiger 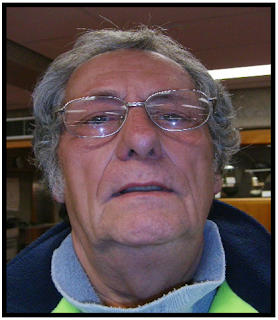 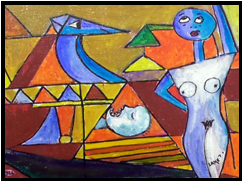 Meow, Meow, Me Am, Me Am
Meow, meow, me, I am daddy’s boy, me am.
I love that he loves me as I am.
He doesn’t mind my smell
And doesn’t put me in a smelly bubble bath.
Meow, meow, me, I am daddy’s boy.
When I was just a few weeks old,
He took me from my feline mother
and put me in his bed
And allows me to smooch
up to him even whilst he snores.
I love the way he cuddles and cradles me
up against his woolly  jacket as he walks around the house.
Meow, meow, me, I am daddy’s boy, me am.
The only time he is cruel to me is when his
Macho friend comes by then he throws me outside
Because he likes him to think he’s a man not a sissy cat.
Meow, meow,
There are times when his music-making drives me mad
And I have to scratch and meow, meow
and rip at the carpet outside his door
until he gives up the racket –
perhaps this is because my name is Mozart
and so he wrongly assumes that I am musical.
Meow, meow even though my time on Earth will soon be over
I like him to be proud the way he brought me up.
I hope  he doesn't get another cat when I die.
Judy Brumby-Lake