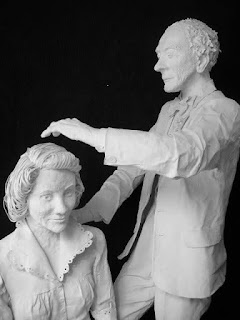 In The Hearts Of Men

On this night, a violent wind roars,

In the distance, the thunderous sea

Pounds and whips the shore,

Venting its anger in  protest at those

who would control its moods -

Or hold it back from its mission of destruction.

The night is iron hard and coal black,

Just like the hearts of some men in this world

Who use force to control and silence

All that is good and right.

I invited positive thoughts into my mind

And with optimism they bounced in

Then collapsed to the ground

As they were assaulted by fear

What is wrong, what is happening here?

As the breath was seized from their lungs

And they had an insane urge to run

Tranquility stirred in her long-forgotten place

I am over here, she softly hummed

But you have to slow down and breathe

For I am a part of fear

It’s just that he is louder than me.

from a small and unknown place,

Yet his ideas would spin around the world.

A man who loved the drama and the music

with the sweating men who mined Mt Bishoff’s tin,

potato growers in the local pubs,

or parlour folk at parties in the towns.

Or on the stages of the famous theatres

of the cities of Australia,

Alexander used the power and passion of his speech

to move an audience to laughter, tears, or joy;

he loved to be the focus of all eyes.

But blighted with a problem with his voice,

his whole career at hazard,

he hit upon a system of control,

this restored his shattered confidence

and gave him back command.

Travelling to Europe and to the States,

as teacher, actor, confidant and friend,

His acolytes and pupils

spread his teachings and techniques.

But, as a prophet, he was truly without honour,

obscure in his own home.

Now, here we see the man

in process of transforming power

to the young attentive woman in his chair.

carnation in his button hole;

he seems, perhaps, a dandy, or a charlatan:

between her body and his hands,

she’s almost on her own,

Now she can face the world

with confidence and grace,

the compassion and the skill,

of this small man,

who came from such a small and unknown place.

I’m unique, my throat is on fire.

Someone has used a rasp on my throat

Whilst asleep – I can barely talk.

My stomach feels as if it is twisted,

My limbs feel as if wrenched from my body.

My nose is stuffed, my lungs constricted.

My head is pounding,

I am drowning in wet tissues.

Sugar with kerosene – nothing.

The garlic wreath around my neck

Didn’t help with this dreaded flu.

But then I read that flu was rampant

Amongst soldiers in the trenches

No warm bed or antibiotics for them.

But then I saw an article

on the Spanish flu

And I pulled  the sheets over my eyes

For I am sure that

I have the cursed Spanish flu.

They are in there carefully put away

Perhaps they are already out to play

Or will rise again one day

That so love their feasts

On all of our good intention

They are the things we don’t like to mention

That can easily turn love to dust

The one who is such a glutton

Triggered by some unseen button

The one driven by greed

What a sad and sorry seed

Or that very sleepy sloth

A would-be butterfly choosing to be a moth

Then there’s the one who rains down wrath

There is one that only knows envy

That can also be very deadly

Let us not forget the one

What a tiring fake ride

All of these reside

We learn from one or all

Many times, they may see us fall

Once each is seen in its true colour

We can make them so much smaller

But always know they live on in there

Waiting for a chance of more fresh air.

I was wrong to love you just for me,

To be the who of you, as far as I could see,

I needed you for needy’s sake,

Could only morsel give in appetite to take,

Wallowed in such savagery of grief,

Uncomprehending, ignorant, of your death’s relief,

Unforgiving, reminding, as I grow older,

Memories sharp and still they chafe,

Nowhere to rest, to hide, nowhere is safe,

In cacophony troubled years have grown,

Since, in isolated silence, you died alone,

And so I missed the measured beat of rhyme,

Unaware, in my departing, it was for you, your time.

I should have stayed!

I saw myself, I thought, upon a bed,

Wondered: Is this a trick inside my head?

Was looking on with ever-rising dread,

I saw people, sombre, many tears they shed,

Grief all-consuming - on itself it fed,

Just fearful sobbing and nothing said,

Their forever dreams in tatters, shred,

To all this wracking sorrow, they were wed.

At your call, I had followed, you had led,

Now I am watching on with you, beyond,

The Cry Of The Plovers

What sound is that?

No! It’s not automatic gun fire

But a sound that raises my ire.

From other birds and ME!

The carolling of the magpies

Or the raucous laugh of the kookaburra

But the cry of the plover

Have A Happy Winter

A mother’s love warms a home.

Outside a thick coat and umbrella.

Filling tanks and necessary to drink.

A mother’s love warms a home.

Previously: Four convicts had started to build the road to Hampshire into the bush against the will of the company. The two dogs had killed a native cat and Hellyer had sketched it.  Hellyer is lying down in his tent when Harley calls out to him.

‘Mr Hellyer, Mr Hellyer, wake up! He’s here. He’s here, Just come in a whaleboat. He’s standing at the bow in his uniform, a sword by his side. Mr Hellyer!’

Hellyer, who has been asleep on a bed of bark, slowly moves to open the tent flap. ‘What, what, Harley! Who’s here?’

‘Lieutenant Barnard, sir, your opposite

‘Alright, Harley, put that gun you hold into my tent. He doesn’t have to see that.’

‘You can’t shoot him. Have you been drinking? Put the gun in here then bring Barnard here to my tent and put a pot of tea on the fire.’

‘Yes, sir, Mr Hellyer, but I’d love to shoot him. I could go into the trees and n one would ever know who shot him.’

‘Don’t talk nonsense, Harley, give me the gun. Now go.’ Hellyer puts on his dress coat and his official surveyor’s hat, dusts himself off and steps outside the tent onto the sand of the Emu Bay beach. He watches as Barnard alights from the whale boat that is rowed by convicts. Harley leads Lieutenant Barnard over to Hellyer, who now stands by the fire.

The moment Barnard has approached, he speaks: ‘Hellyer, Henry, I’ve come all this way and the sea isn’t calm either today. Mr Curr thinks it is a great mistake to build the road from here. It’s too hilly and too overgrown. We would like to withdraw and begin again from Table Cape to the Hampshire Hills.’

Hellyer folds his arms across his chest and nods.

Harley approaches Hellyer from behind and whispers, ‘Shoot him, let me shoot him, please, please.’ Hellyer pushes Harley away.

Hellyer shakes hands with his guest. ‘Lieutenant, good of you to come. Let’s have a good old cup of British tea.’

(To be continued next month)

Professionals, when beating up people,

with his mouth open, screams, unheard,

above the noise of the crowd.

He looks at me,

His eyes are half-shut - pleading.

His face is distorted with horror and fear,

I step back, hold my breath.

This  could be me!

They  know their job.

One, with his visor down,

He has his stiff, black baton, erect; ready to come.

Under the visor he grins with the joy of brutality,

or someone who is beating a woman into submission.

A sun-glassed man has no helmet.

He looks at the scene with disgust:

Another has his visor up and a determined look on his face,

his right hand, from behind, is around my friend’s throat,

whose right hand, which was to ward off the attack,

has been grabbed by the wrist.

A thunder cloud has blocked the light.

The bare trees, all around, are raising their limbs in protest.